OUR STORY
In 2014 our founder, Muhammad was suffering from hay fever and had heard whispers of the superior healing benefits of local, raw honey. He began to search far and wide, and eventually stumbled over a hobbyist beekeeper, who was able to provide a few jars of his local runny honey. After having the honey, he experienced a eureka moment of his own; since this honey was so difficult to come across, he could start to supply honey himself. Muhammad began to search for a commercial beekeeper that could supply larger amounts of honey. He had found a great local honey source in Leicestershire, perfect for his newfound interest thus Eden Queen was born. The name, ‘Eden Queen’, found its roots in the age-old Genesis tale of the Garden of Eden and it’s queen bee, the central point of such natural beauty and bliss seemed to be a befitting name for nature’s liquid gift. Our journey began stocking the shelves of small independent stores, ranging from pharmacies, delis, garden centres and mini supermarkets and continues to grow, expanding its range of products.

OUR FOUNDER
As a former student of pharmaceutical and cosmetic science, Muhammad’s degree served as a stepping-stone into launching his business, having ditched the lab coat for an apron. In pursuit of furthering his company, Muhammad has earned the position of runner up in the De Montfort University’s student entrepreneur’s competition, ‘Pitch 2 win’, as well as earning several appearances in the local newspaper. Passionate about the wondrous benefits of honey, Muhammad strives to make Eden queen the Heinz of the honey world, a company which hopes to one day stock the finest honeys from across the hidden corners of the globe. 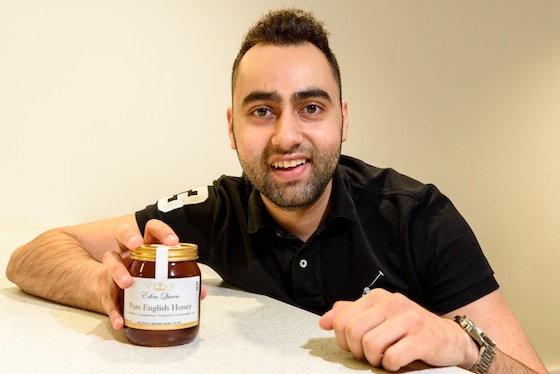